What Time Of Year Are Radon Levels Highest?

Radon is a constant problem you need to be aware of all year long.

But are there certain times of year or conditions that can cause radon levels to be higher?

Your indoor radon level tends to be higher during the winter months, but some things can cause radon exposure to be just as high during the summer months.

There are several factors related to seasonal variations and human behavior that affect radon levels.

So, what time of year are radon levels highest?

We'll look at that and more in the article below.

Radon is a serious potential danger to people in the United States.

Radon is created in the earth by the decomposition of the radioactive metal uranium.

When uranium breaks down in the earth, it releases the colorless, odorless, tasteless gas called radon.

Radon was discovered in the late 1800s and was quickly identified as a severe threat to your health.

Radon gas is inhaled through the nose and mouth, allowing radon particles to find a home within the lungs and slowly build up over time.

After years of exposure, radon can develop into pronounced health issues.

One of most the most serious health risks are the increased risk of lung cancer.

And since it is odorless, colorless, and tasteless, the only way to know if your home has elevated radon levels is by using radon test kits or contacting a radon mitigation company to perform radon testing on your home.

It's estimated that more than 21,000 lung cancer deaths in the United States alone are attributed to radon each year, second only to smoking.

Radon makes its way into your home by seeping in through cracks in your foundation, walls, construction joints, and gaps around the plumbing.

It can also get in through exposed earth in the basement or crawl space.

Why Is Radon Higher In The Winter?

There are a few different reasons why concentrations of radon can be higher in the winter.

Most of us know that warm air rises because it becomes less dense as it heats up.

When you heat your home during the cold winter months, hot air escapes through the top of the house, and more air is pulled in to equalize the air pressure.

The air pulled in typically comes from the soil below your house, rising through your foundation, plumbing pipes, or the sump pump pit.

Unfortunately, radon gas may be present in the air brought into your home.

Even if snow doesn't interfere with your daily activities, it can still affect radon levels in your home.

When there's snow lying on the ground around your house, it can create a layer of water or ice on the soil.

That creates a barrier on the ground and traps radon underneath.

Since the radon cannot escape through the soil outside your home, it's more likely to be pulled into the earth under your home, through your foundation, and into your home.

The first day of spring that brings nice weather allows us to open our windows and let fresh air in.

We often open our windows during warm summer nights to cool our homes down.

However, in the winter, our windows stay sealed tight.

Being able to open your windows allows you to dilute the radon gas in your home.

In the winter, when you cannot open your windows, the radon gas in your home can become more concentrated.

Are There Other Factors That Influence Radon Levels?

Other factors can influence the average radon level in your home at any time.

Light wind and rain and generally moderate weather will have a very mild effect on your radon levels.

However, heavy storms and severe weather have a more pronounced effect on radon concentrations due to the changes in barometric pressure.

They also affect the soil around your home.

The soil can be stirred up by driving winds and heavy rains, making it easier for radon gas to escape from the ground and into your home. 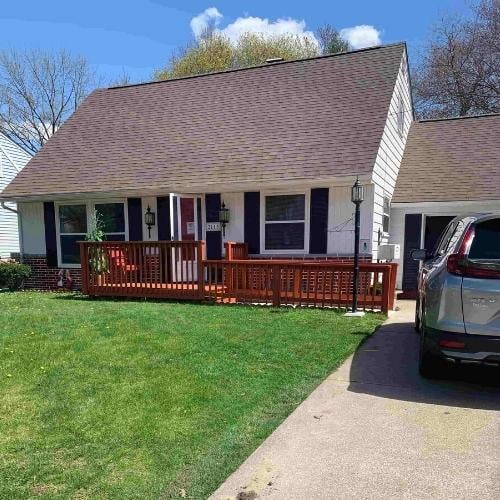 Are Radon Levels Always Highest In The Winter?

So far, it seems like all the evidence points to radon gas levels being higher during the winter months.

However, this may not be entirely true.

Data is starting to show that radon is an equal risk across all four seasons.

About 25% of homes even have their highest levels of radon during the summer months.

For most of the 20th century, many homes saw their highest radon levels during the winter.

But in the 21st century, radon levels in North American are thought to be increasingly even across the seasons.

The reasons for this are still being studied. One hypothesis argues that the increased use of air conditioning decreases ventilation of properties in the warmer summer months.

A study of Canadian homes paired with winter and summer radon tests showed that 47.5% of buildings showed a minimal difference.

Reduce Radon All Year With A Radon Mitigation System

It can be frustrating to find out your home has high radon levels, no matter what time of year it is.

Fortunately, there is something you can do about your elevated levels.

The first thing you can do is test your home.

If it tests high, you need to have a radon mitigation system installed right away.

And you should test your home during the winter and summer and always opt for a long-term test over a short-term test.

If one test shows low, it may be elevated during the other months.

Although there is no "safe level" of radon, the action level for radon levels is 4 picocuries per liter(pCi/L).

If your home's level of radon is above this, contact Radon Eliminator today.

The experts at Radon Eliminator can install radon mitigation systems to reduce your radon exposure all year long.

Click the button below to schedule your discounted test.