If you aren't familiar with Radon, you're not alone.

Most people are unaware of what radon is, and that is very unfortunate.

It forms naturally from the decay of radioactive elements like uranium that are found in soil and rock throughout the world.

Once in the soil, radon gas can move into the air and underground water and surface water.

It's because behind only smoking; radon is the second leading cause of lung cancer.

Hopefully now I have your attention.

Radon can be in your house right now, penetrating cracks in your foundation and floors, or seeping into your water supply without you knowing it.

That was the case for the former USA hockey star Rachael Malmberg.

We'll talk about her story below.

For more information about uranium and radon risks to your wellbeing, read our blog post "What are the Health Risks of Uranium." here.

Everything changed for Rachael a little over two years ago in 2016.

She was healthy and worked out regularly, so she had no reason to think anything was wrong.

She started having consistent back pain and pain in her ribs but thought nothing of it.

She would eventually decide to visit the doctor to see what was going on.

While she was there, she heard the word no one ever wants to hear from their doctor.

After dealing with the diagnosis, she took it as an opportunity to get educated and researched the leading causes of lung cancer.

Like most people, she had no idea what radon was, much less that it caused cancer.

“It wasn’t on my radar at all actually until I started doing research on causes of lung cancer. Upon diagnosis I had no idea about radon,” Malmberg told Fox News.

Most people breathe in radon every day, usually at a low level. When the levels of radon get higher is when you need to start to worry.

When inhaled, radon damages the cells that line your lungs.

Radon levels below 0.4 pCi/L are the safest according to the EPA. Levels of 4 pCi/L need to be addressed immediately because levels that high can cause lung cancer.

Malmberg would eventually learn that her childhood home had radon levels of 7.9 pCi/L, while the home she shared with her husband and daughter had levels of 6.9 pCi/L.

Both levels are much higher than the levels recommended by the EPA.

Since learning of the high levels of radon, Malmberg has installed a radon mitigation system, which reduces gas in homes and buildings.

In 2017, about a year after her initial diagnosis, Malmberg had 22 lymph nodes removed in her lung as well as stereotactic brain radiation.

Doctors have since been keeping an eye on a small spot on Malmberg's brain. It's a spot they hope is only scar tissue.

Malmberg is currently continuing targeted therapy to keep her cancer under control.

Malmberg has since partnered with Airthings, a radon detection system.

In honor of January being radon action month, Malmberg launched a challenge encouraging families to test the radon levels in their homes.

She hopes it can keep people from developing cancer the same way she did.

Malmberg also serves as the president of Cancer Survivors Against Radon, an organization made to raise awareness of the dangers of radon exposure.

She continues to spend her time raising awareness on the dangers of radon, and helping people that have been diagnosed with lung cancer as she has. 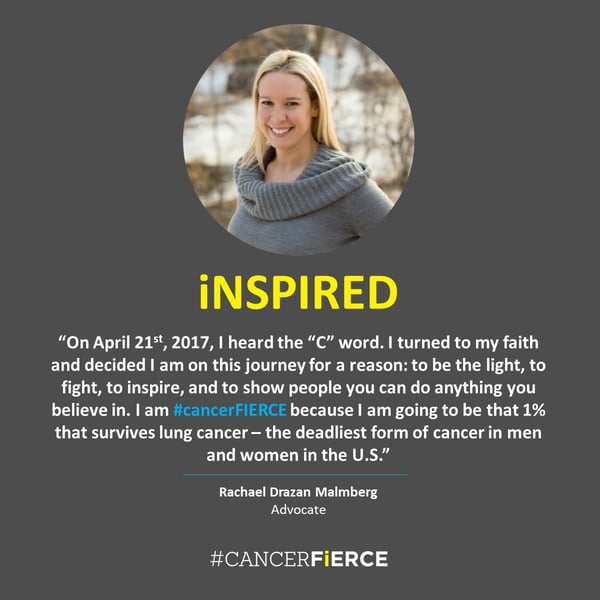 The first step to fighting Radon is to get your home tested.

You need to know if your home is safe because if it isn't, it needs to be corrected right away.

The people at Radon Eliminator are experts in the field, and they will be sure your home is safe for you and your family.

They want to be sure you don't get the same bad news Rachael Malmberg received.

Click the button below to get started. You don't want to waste a single second.