Radon Danger Zones In Ohio | Which Areas Have The Highest Levels

If someone asked you what the second leading cause of lung cancer is, could you answer them?

What if they told you that if you're a non-smoker, it's the leading cause of lung cancer.

20,000 lung cancer deaths are caused by it every year.

Still, don't have an answer? Don't worry; you're not alone.

I'll spill the beans. The second leading cause of lung cancer is radon.

That probably sounds familiar, but you might not know exactly what radon is.

Radon is produced when radioactive elements, such as uranium, decay. Uranium is found in soil and rocks throughout the world.

If you live in an area where these elements exist, radon could be extremely prevalent.

Are you building a new house? Read our blog post: “What Can I Do to Reduce the Risk of Radon When Building a New Home?” here.

Radon enters your body by attaching itself to dust and other airborne particles.

Once in your body, the radon gives off radiation that damages the DNA in your cells.

That's what causes the lung cancer. 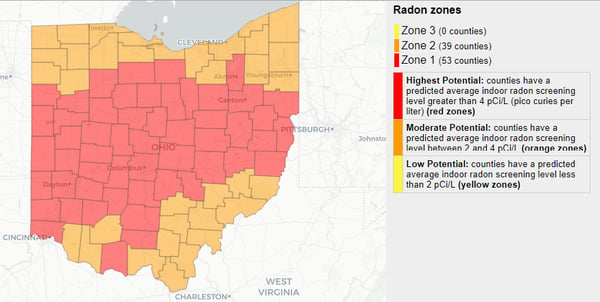 Ohio is one of the worse states for Radon.

Out of the 92 counties in Ohio, 53 of them are in the red zone, with the highest potential of indoor radon.

39 of them are in the orange zone, having moderate potential.

None of them are in a zone with the lowest potential.

That means more than half of the state is at high risk for radon.

The rest of the state has moderate risk.

As a state, Ohio has been designated as a Zone 1, the highest risk zone.

Which parts of Ohio are the most at risk?

Based on the information above, it would be safe to assume that if you live in Ohio, you have a high risk of having radon in your home.

However, there has to be one area, one county, that is worse off than the rest.

If you live in Licking County, I have bad news for you.

In Licking County, 3 out of every 4 homes have a radon level that’s higher than the U.S. Environmental Protection Agency’s safety standard.

And it gets worse. The level is not only higher than the EPA's standard, but it's nearly double.

The EPA considers 4 picocuries of radiation per liter of air a high risk. In Licking County, the radon level in its homes is 7.49 picocuries per liter.

Why is it so high?

I'm sure at this point you've got your pitchforks ready.

You're all set to march down to street and protest these high levels of radon in your homes.

It's unsafe, and it's unacceptable.

So, who do we blame?

You can put your pitchforks away, there's no one to blame.

Mother Earth is the only one to blame.

It's a matter of geology. More specifically, the Ohio Shale.

Shale is a fine-grained, clastic sedimentary rock composed of mud that is a mix of flaky clay minerals and tiny fragments of other minerals.

Glaciers moved through Ohio tens of thousands of years ago and deposited materials from Canada in their wake.

It's not known with certainty exactly what's in the soil, but minerals like shale and granite contribute to high levels of radon.

If you live in Ohio, you're bound to live on soil that produces radon. 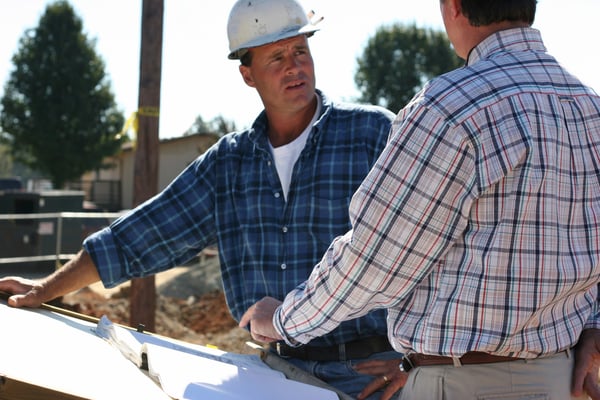 What do we do about it?

The very first thing you need to do is have a radon test performed on your home.

Once you know if you're home is at risk, then you can move forward.

If you find that your home is at risk, you need to have a radon mitigation system installed as soon as possible.

Since the radon comes from the soil, the mitigation systems work by drilling a hole in the ground through your foundation.

Then it sucks the air from the ground and expels it from the house through your roof.

If your home tests at the EPA standard of 4.0 pCi/L or higher you need to get a mitigation system installed.

You don't want to risk your health or the health of your family or pets.

A cancer diagnosis years down the road is not worth the risk.

Since you don't want to put your family at risk, you need to get your house tested right away.

The experts at Radon Eliminator will come out to test your house and let you know if you need a mitigation system.

If you do, you're in good hands because they are the best in the business and will install one right away.

Don't wait around to make the call. The health of your family is at stake.

Click the button below to get a discount on your test, and get started right away.